Emotions Evoked by These 12 Colours 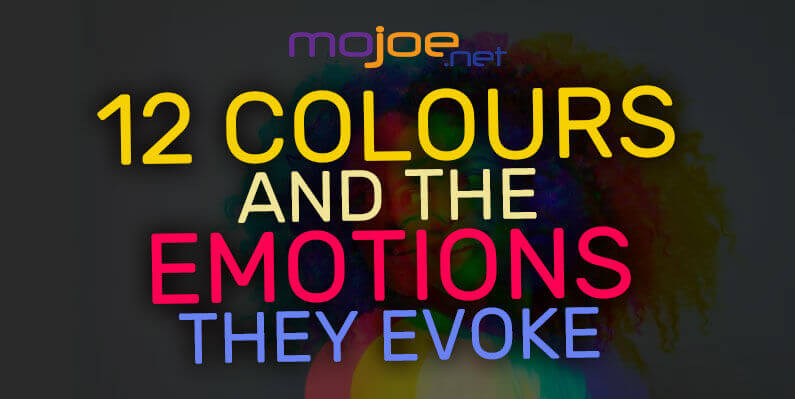 Did you know that one of the lesser-known ways to invoke emotions is through colour? It’s well-known that poetry can make people swoon and a shocking image can enrage people into action, but the right use of colour can be equally as powerful. You only need to look at the world around you to see and feel its impact.
Colours elicit unique responses in the viewer, and a savvy web designer (or any visual professional, actually) will be well versed in the effect of each individual colour, plus how and when to use each.
The discipline of colour theory may be broad (find out more about colour theory here), this article will teach you the fundamentals in a single quick-reference source. However, before we delve into the emotional nuances of 12 separate colours, we need to add a quick note about vibrancy. Want more? Explore these uses of colour in branding.
Simply put, a colour’s vibrancy is how dark or light it is. The tricky part about vibrancy is that, just like each individual colour has its own properties, so does each shade of the same colour.
While light green and dark green have more in common than green and purple, they will still have smaller, more subtly different effects on the user.
Below, we’ll explain all the noteworthy differences between a colour’s shades, and consider their impact on web design. As a general rule, though, brighter shades tend to be more energetic, while darker shades feel more relaxing. The brighter shades of calls-to-action attract the eye, while the darker shades in backgrounds help create an immersive effect.
Now on to the impact of different colours on viewers…

Emotions: Passionate, aggressive, important
As a dominating colour, red adds gravity and heightened awareness – quite literally, as the colour increases blood circulation, breathing rates, and metabolism.
Red can take on a variety of meanings, associated with both love and war, but the unifying factor in all meanings is a sense of importance. Think of the red carpet.
Red is a colour best used cautiously. Its knack for attracting attention makes it a priceless tool for designers, but used excessively it will inhibit relaxation. Lighter shades emphasize the energetic aspects of red – including youthfulness – while darker shades emphasize power, and even durability, such as a brick wall.
The landing page for the game design company Playtika has an aggressive but potent flair. Playful and stimulating, the red suits the cheetah logo – a powerful icon itself, softened by its cartoonish qualities and anthropomorphic smile.

Emotions: Playful, energetic, cheap
Sharing red’s energizing aspects, but to a safer degree, orange is a good way to add excitement to a site without severity. It is generally playful, and some claim it creates haste and plays on impulse. It can even signify health, suggesting vitality and vibrance.
Creative agency Epic uses orange as the highlight colour on its website. The choice emphasizes the team’s playfulness and youthfulness.

Emotions: Happy, friendly, warning
Yellow is a strange colour: it is often associated with happiness, but also activates the anxiety center of the brain. Like red and orange, it’s able to stimulate and revitalize – it’s the colour of warning signs and taxis – but use bright yellow sparingly because of the potential negative connotations.
Lighter shades play on the happiness aspects, reminding users of summer and the sun. Darker shades, including gold, add more weight and give a sense of antiquity.
The bright yellow-dominated colour palette on the Post-it website is synonymous with the product itself. It creates an energetic vibe and is instantly recognizable as that particular brand.

Emotions: Natural, stable, prosperous
Green mostly represents the environment and outdoors, for obvious reasons, making it the clear choice to suggest nature and organic quality.
As the bridge between stimulating, warm colours (red, orange, yellow) and calming, cool colours (blue, purple), green is the most balanced of colours, lending it an air of stability. It’s also a popular choice as an accent or for calls-to-action because it stands out, but more softly than the warmer colours. In Western culture, it also represents money and financial safety.
The site for game Sanhok uses green to emphasize being outdoors and in the wild, with different subtle hues used throughout.

Emotions: Serene, trustworthy, inviting
Blue is one of the most popular colours in web design – and for good reason. You see blue on a lot of websites because, to put it simply, it is the colour of trust. Blue is the colour of calm and serenity, and as such inspires security and a feeling of safety.
For this reason, blue is a colour often used by banks: CitiBank, Chase, Capital One and Barclays, for example, all use blue. However, the calming effects also make blue a friendly and inviting colour, which explains its adoption by Facebook and Twitter.
As if that weren’t reason enough to use it, blue is also incredibly versatile; its vibrancy has more drastic effects than other colours. Light blue is the colour of water and the sky, so it generally has a refreshing and free feeling – and can be even energizing if bright enough, while still retaining that reliable calm.
Darker blues tend to be more somber, heightening the security aspects, which makes them an excellent choice for professionalism. Trust is essential for financial advisors such as Evolve Wealth, so most of its site is designed in varying hues of blue.
All this comes at a small price, though: blue shouldn’t be used for food-related sites. Because blue foods aren’t common in the wild, studies show that the colour actually acts as an appetite suppressant.

Emotions: Luxurious, mysterious, romantic
Long associated with royalty, purple creates an air of luxury, even decadence. Using purple dominantly is a quick way to create a sense of elegance or high-end appeal, even if your product is budget-minded (an ‘expensive’ effect that’s quite the opposite of orange).
Lighter shades of purple – especially lavender – bring to mind spring and romance. Darker shades add more mystery, and can even symbolize creativity. Darkening the shade will also turn the romantic elements more sensual.
With its ties to personal wealth, WooCommerce chose purple as the colour to represent its WooView app, playing on themes like royalty and panache that fit the function of checking how much money you’re making in real-time.

Emotions: Feminine, young, innocent
Pink is a specialist colour that won’t work for a lot of websites but will work perfectly with the right audience. Because most people interpret pink as feminine, the colour is popular for targeting female users. However, don’t overdo the pink-femininity connection, or else you’re walking a fine line between appealing to users and pandering to gender stereotypes.
Its links with childhood and with sugary treats give pink a sweet, sometimes innocent appeal (not surprisingly a self-perpetuating cycle). It is also traditionally used with love and romantic themes, alongside red and light purple.
Rental service Rentberry‘s website uses pink as its key colour. In this case, it creates a soft, safe vibe, and intentionally distances itself from more corporate, traditional rental services.

Emotions: Earthy, sturdy, rustic
While not a popular choice in web design, brown can, under the right circumstances, be effective nonetheless. As the colour associated with the earth and trees, brown can add an outdoorsy feel, maximised by a pairing with green. The tree connotations also give a sturdy and reliable feeling.
In web design, brown is often used in conjunction with wood texturing, giving the same old-fashioned and rustic atmosphere as a wooden cabin.
While tech websites are typically dominated by stronger, bolder shades, the microsite for B&O Play used brown to great effect. The muted tones suggest a classier, more human side to the technology on offer. Natural connotations also remain wood and leather feature prominently in the hero video, while a marble effect is used in the background.

Emotions: Powerful, sophisticated, edgy
As the strongest of all colours, black is often used only sparingly – such as for text – but it works quite well as a primary colour element (like for backgrounds). Much like purple, black adds an air of sophistication and elegance, and also a mystery, though with much bolder confidence.
The heavy use of black for the Cartelle creative agency creates an unquestionable impact on its homepage and subsequent animations.

Emotions: Clean, virtuous, healthy
Literally the opposite of black, white pairs well with just about anything, making it ideal as a secondary colour. In a supporting role, white draws out the elements of more stimulating colours, and can even guide your user’s attention if you know how to use it (check out UXPin’s Zen of White Space in Web UI Design guide to learn more).
As a primary colour, though, white gives off an impression that is both clean and chaste. White has that ‘spotless’ feeling that, for the right site, feels completely effortless. Its association with purity can make it seem virtuous, but also sterile and cold.
To soften this feeling of sterility, some web designers will tend towards an ivory or cream instead. These offshoots of white are softer and even less noticeable, but with the same minimalist and complementary aspects. They are the more comforting and less stark alternatives to white.
The shoe company ETQ uses a dominant off-white background to keep the users’ attention where it belongs: on the shoes.

Emotions: Neutral, formal, gloomy
As the intermediary between black and white, grey exudes neutrality or a lack of any particular sensation. However, in the hands of an expert, this intermediary position can be a powerful tool.
By varying the vibrancy, grey can take on the properties of either black or white – attention-grabbing or repelling – to specific degrees. That means if black is too powerful for your design, try dark grey. If white is too bland, try light grey.
On its own, though, grey is rich with individual characteristics. It is the colour of formality, so sites aiming to look traditional or professional tend to favour it. It can also give a depressing vibe, as it’s the colour of gloomy, rainy days. When used dominantly, it can be somewhat subdued, for better or worse.
You can tell the Italian furniture company Galvan Mobili uses grey well because you don’t even notice it. The grey background gives a professional air, and keeps attention on the pictures and bright red logo.

Emotions: Accentuates surrounding colours
Beige may not be a primary colour, but it’s worth mentioning because of its accentuating effects: it takes on the characteristics of the colours around it. While dull on its own, its enhancing effects make it a powerful choice as a background or secondary colour.
The use of beige for the aptly named Tokyo restaurant Beige Alain Ducasse creates a calming, comfortable backdrop to the more relevant elements such as clickable text and photos.