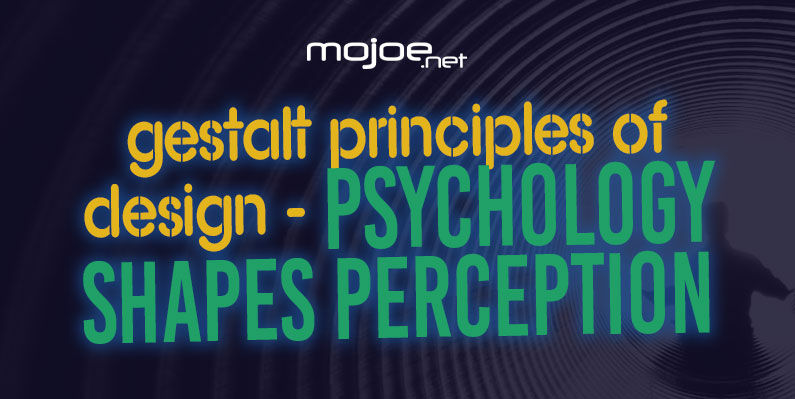 The Gestalt principles form a psychological framework for how the human mind perceives and organizes visual information. The theory behind them was founded over the 1910s and ’20s by German psychologists Max Wertheimer, Wolfgang Köhler and Kurt Koffka. Since then, it has found acceptance in disciplines ranging from therapy to cybernetics to design.
The word “Gestalt” literally means “form” in German, and this is fitting because the theory describes how the mind transforms apparent randomness into reliable forms. Consider music, for example—our brains are wired to organize what we hear into cohesive melodies rather than separate notes.
For graphic designers, employing Gestalt principles is an essential tool: designers are able to emphasize visual relationships and communicate more effectively when they understand how viewers interpret visual information. In this article, we’re going to investigate these Gestalt principles and how to apply each one to design. But to understand Gestalt’s visual relationships better, let’s first look at some relevant concepts of perception.

Some concepts of perception

Gestalt theory itself describes how visual elements are grouped and separated to create order through stable forms. But there are a number of other underlying psychological concepts relating to the perception that inform our understanding of Gestalt theory (which goes beyond perception to describe visual relationships). Let’s briefly go over a few of these:

The 6 Gestalt principles of design

With the above concepts of perception in mind, let’s take a look at the Gestalt principles.

The Principle of Simplicity states that the eye will instinctively choose to interpret the simplest possible form. This means that when presented with an image containing multiple shapes, the mind may choose to separate them or group them depending on which solution is the most straightforward.
For example, even though the pictured image could contain three identical, overlapping shapes or eighteen separate lines, we tend to assume the former because that is the simpler visual solution.
While important, the law of simplicity is not as easy to define outright as other Gestalt principles. Designers must use their judgment when determining which interpretation of composition the viewer will find the most simple. Often, basic geometry and past experience provide the answer as viewers have an easier time interpreting forms that are already familiar to them.
Let’s look at two examples, one in which the simplest form is the whole form and one in which it is the separate shapes. In the Bluefox logo, emergence takes precedence because it is easier to understand the composition as a recognizable animal silhouette rather than focusing on the specific triangles, diamonds, and lines.
On the other hand, the LMAD logo is more easily understood as three overlapping triangles because the combined form does not create a simplified, recognizable shape. This is why KisaDesign emphasizes this interpretation with separate colors for each triangle.

Proximity describes the spatial relationship between objects in terms of whether they are close to or far away from one another.
Specifically, the Gestalt Principle of Proximity states that objects that are near each form a collective group even if they do not come into direct contact. This principle holds regardless of whether the proximal objects differ in a variety of other ways such as size, color, and shape.
A classic example is words on a page: we understand letters to form a distinct group, i.e. a word when space separates them from other groupings of letters.
Similarly, designers can use proximity to imply a group relationship without having to make this relationship explicit. M.m.’s poster design, for example, uses proximity to convey themes of unity and isolation through simple abstract shapes. But proximity is most useful for establishing visual hierarchy in design. Grouping and separating sections of copy with white space allows viewers to organize important information on posters, brochures and websites for example.

The Gestalt Principle of Similarity states that objects that with similar qualities are understood to belong to the same group. These qualities are generally the physical and visual attributes of an object, such as color, texture and shape.
An example would be how articles of clothing can be separated into groups—i.e. t-shirts, button-ups, vests, pants, etc.—based on their shape even when mixed together in a wardrobe.
For designers, keeping elements similar in construction gives them the freedom to vary the arrangement without confusing the viewer. In the Stacked logo below, the forms are not aligned or even the same precise shape, but we understand them as belonging to the same group because they contain the same color and shading properties.
Designers can also leverage the inverse of the similarity law, which is to say they can intentionally make design elements dissimilar in order to prevent them from being perceived as a group. For example, the Skyline logo consists of shapes of similar colors arranged close together, but dissimilar properties allow us to perceive them as separate: instead of one abstract shape, we see the suggestion of mountains, pine trees and sky.
Dissimilarity can also create emphasis when the ratio from similar to dissimilar is unequal. For example, in the IRYSS logo, one shape is colored differently from the rest, acting as a focal point and drawing the eye.

The Gestalt Principle of Common Fate states that objects are perceived to be part of a group when placed on the same trajectory. In other words, objects that appear along the same invisible linear path are implied to have a relationship. For example, in this picture, we perceive the different parts of the butterfly’s wings even though they are composed of abstract shapes moving in similar directions.
Common fate often implies motion, and it is useful for designers wishing to emphasize strokes. Consider the separate curves of the Kirem logo below: common fate creates an implied motion so that we can almost see each stroke forming the letter being written before our very eyes. Similarity and proximity bring these shapes together to create a finished letterform.
Common fate can also be useful in establishing 3D forms. For instance, in the PurPapier logo, the larger shape is moving one direction and the overlapped grey shape that is curving in the opposite direction, implying that they belong to the separate groups of background and foreground.

The Gestalt Principle of Continuity states that the human eye will follow a line beyond its endpoint in order to avoid sudden interruption. The pictured example could technically consist of several separate lines, but we perceive the paths as four intersecting lines because the eye prioritizes smooth, uninterrupted continuation.
This principle is especially useful for line drawings and illustration. Understanding how the eye will follow and connect separate brushstrokes allows the illustrator to intentionally keep the intended figure cohesive.
It also allows designers to use overlapping lines to their advantage: viewers will understand that an overlapped line is still one unit if it continues along the same path. This holds true regardless of whether other properties such as color or weight vary.
For example, the Kasella logo could be seen as a series of diverging arrows due to their separate colors, but the law of continuity allows us to see the converging lines of a ‘K’ despite the interruption.

The Gestalt Principle of Closure states that the eye will perceive a completed form even if parts of the form are missing or incomplete—in other words, there is a tendency to resolve partial visual information. A classic example is a dotted outline where people tend to see an overall shape instead of unrelated short lines.
The closure allows designers to distill figures into their simplest possible form and can be useful for minimalist arrangements. In the uncoil.io logo, the viewer uses closure to understand the overlapping coils of a snake without actually seeing them.
This approach is especially useful when combined with past experience—in the kickstand logo, our preconceived understanding of a bicycle shape allows us to use closure to fill in the missing connections between the abstract triangles and circles.

Put these Gestalt principles to practice

The 6 Gestalt principles describe the psychology behind how people interpret visual information, and they are important for graphic designers, the architects of visual information, to know. A solid understanding of the Gestalt principles allows designers to direct the viewer’s perception with intention and purpose rather than relying on gut feelings.
Of course, when all is said and done, Gestalt theory is only a means to an end. If you are a business owner and are looking to improve how viewers perceive your brand designs, you will need both Gestalt psychology and a talented designer.